contents:
Part 1. Functions
Important for a correct understanding of the following: in some socionic schools, signs of functions are used in order to give the functions of one or another semantic shade - in connection with the influence of third Reinin's features (complication - simplification or contentment - discontent). We completely reject such an approach. We use signs for functions (also as for dichotomies) in a purely mathematical sense: plus means an excess of a function, minus means a deficiency.

Averaged values of socionic functions for real representatives dyfferent types:
(the figures show the relative deviation of the values of the function from the average population, averaged on all people with this type being the leading one)

Part 2. Dichotomies ("Reinin's features"):
Real (given below) the semantic content of the dichotomies is based on the analysis of the statistics of Talanov's large questionnaires.

Dichotomies that determine the strength of functions:
a [логик/этик = "logical/ethical"]: "thinking - feeling", orientation to objects - to subjects, formal logic - cognitive empathy, calculation - suggestion (incl. autosuggestion). Suggestion pole is characterized by a more generalized excitation of the nervous system, and calculation pole is more local (the functioning of the brain is more like a computer). The extreme forms of manifestation of the calculation pole is schizoid personality disorder and antisocial personality disorder. Histrionic personality disorder contains features of the suggestion pole.
b [интуит/сенсорик = "intuitive/sensor"]: imagination - sense, abstractness - concreteness, mentality - physicality. Imagination pole differs in wider perception filters (which allow more signals to pass through - both allowing to detect something useful or dangerous in advance, but also containing more errors of perception), and the sense pole - narrower perception filters (which allowing to better control movements of body and identify habitual signals environment). The extreme form of manifestation of the imagination pole is schizotypal personality disorderlink.
c [квестим/деклатим = "asker/declarer"]: separatness - acceptance (of unity): divergention - convergention, irritation - patience, disgust - indiscrimination, distancing from someone else's - accepting someone else's, creation of the original - competition of copies, personal uniqueness - mainstream (unity of commoners). Belonging to the separateness pole is associated with a narrower area of the personally permissible (such that everything that falls outside the boundaries of this area is rejected). Probably, acceptance pole is largely characterized by increased vasopressin activity in the central nervous systemlink.

Types of thinking: Also thinking can be divergent and convergent.
Divergent thinking means the search and invention of new knowledge, technologies, ways of self-expression and reproduction of offspring. For divergent thinking, the concept of authorship is key, the author takes all the risks, creating something away from the mainstream and not knowing whether it will be in demand in society.
Convergent thinking means using standards and technologies that have already been developed and proven to be relevant. For convergent thinking, it is important not to be original, but to copy, adapt and reproduce technologies, knowledge, plots and norms of behavior that are already in demand faster and better than competitors.

Dichotomies that determine attractiveness of functions for the person (defining quadra values):
ac [рассудительный/решительный = "judicious/decisive"]: peacefulness - rivalness, altruism - selfishness, kindness - evil intent, giving away - usurpation, relaxation - escalation, care - parasitism. The rivalness pole is characterized by a higher level of endorphin release in response to stress, which in some cases can lead to a special search and provocation for stress factors (endorphins addiction)link. Rivalness pole a correlates with traits of the dark triad (machiavellianismlink, antisocial psychopathylink, narcissismlink).
bc [весёлый/серьёзный = "merry/serious"(a particularly unfortunate name for a feature)]: universal meanings - private goals, universalisation - specialisation (in the sense: proximity to the root causes of Being and the most powerful existential experiences associated with them, or distance from these root causes to a specialized state where random and insignificant details dominate); romanticism - pragmatism, inspiration & comprehension - sanity & stylization.
ab [демократ/аристократ = "democratic/aristocratic"]: liberalism - pathernalism, individualism & democracy - collectivism & elitism, cosmopolitanism - xenophobia, focusing on society's future (progressism) - focusing on society's past (conservatism).

Dichotomies that form temperament:
x [экстраверт/интроверт = "extravert/introvert"]: extraversion - introversion, energy excess - energy lack (hyperthymia - dysthymia), initiative - waiting for someone else's initiative, love of risk - risk-aversion, sociability - seclusion, more quantity in work - more quality in work. The extraversion pole is characterized by predominance of the excitation reaction in higher nervous activity, and introversion pole - of the inhibition reaction.
abc [статик/динамик = "static/dynamic"]: will - adaptation (to another will), rigidity - pliability, adheres to the principles - follows the needs, perception of reality as discrete potentials and the distances between them - as flows of resources of one quality or another, being outside the flow of time - inside it, environmental signals are processed as digital - as analog.
abcx [иррационал/рационал = "irrational/rational"]: perception - judgment, spontaneity - control, improvisation - planning, free style - self-discipline. The control pole is characterized by higher activity of the frontal lobes of the neocortex, and spontaneity pole, on the contrary, by a deficit of frontal neocortical activity (which can be caused by a variety of reasons)link. The extreme form of manifestation of the control pole is anankast (obsessive–compulsive) personality disorderlink. 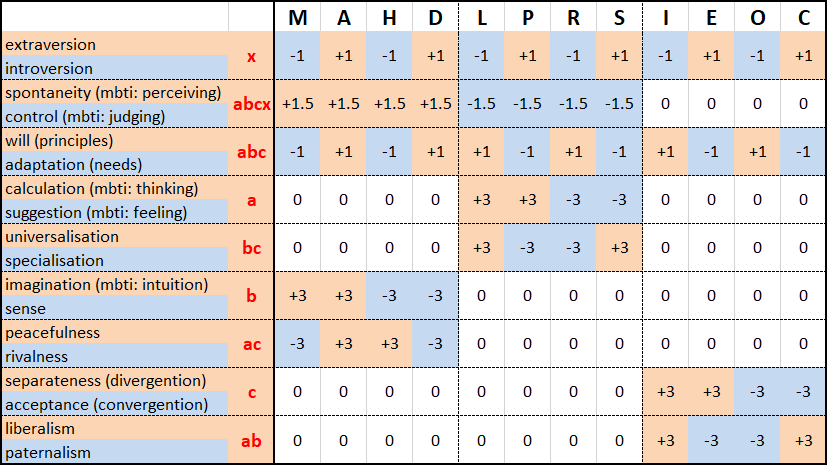 Strategies defining the main way of extracting resources in interaction with the environment (and ultimately forming the properties of this environment):
[БС] H: Introduction of an ecotope into homeostasis (closure of ecological chains; potentially infinite resource in its dynamic circulation; cyclic time); best reproduced in homeostatic ecotopes
[БИ] M: Introduction of an ecotope into a crisis (opening of ecological chains; wasted finite resource in terms of volume; linear time); reproduction is tied to times of ecotope crisis
[ЧЛ] P: Independent (driven by the desire for personal gain) search for a resource; creation of a personal, separate economy, whose success depends only on the personal skills of the individual
[ЧЭ] S: Emotional & behavioral synchronization with the flock, were the search and distribution of the resource takes place; the success of an individual is inseparable from the success of the flock
[ЧК] E: Selectivity in the choice of a resource; narrowing of environmental conditions suitable for survival; dependence on the native ecological pyramid, outside which his survival is impossible
[ЧД] C: Omnivorous in the choice of resources; expansion of environmental conditions suitable for survival; embedding into existing ecotopes, reducing the originality of their ecological pyramids (cosmopolitans, "weeds")

ILE [ИЛЭ] {= +A−R−O} innovation strategy (staking on the discovery of new ecological niches and the spread of one's genome due to the "founder effect"; leads to allopatric speciation)
LII [ЛИИ] {= −D+L+I} intellectualization strategy (refusal of competition in order to avoid the cognitive distortions associated with it; stake on the global progress of intelligent life)
SEI [СЭИ] {= +H−P−E} symbiotic strategy (maintaining the homeostasis of the ecosystem as a whole due to the mutual satisfaction of the needs of all its participants)
ESE [ЭСЭ] {= −M+S+C} swarm strategy (following fashion for the sake of forming a flock, within which the consumption of all its members is synchronized and individual survival risks are reduced due to mutual aid)

SLE [СЛЭ] {= +D−R−I} strategy for enhancing natural selection (ambition to capture the top of the ecological pyramid, turning into absolute predator)
LSI [ЛСИ] {= −A+L+O} stabilizing selection strategy (preservation of the ecotope unchanged, including xenophobia and genocide against all newly emerging species and competing groups)
IEI [ИЭИ] {= +M−P−C} "attractiveness-parasitic" strategy (suggestion of pleasant illusions to the strong host, prompting host to keep the parasite with him, protect him and take care of him)
EIE [ЭИЭ] {= −H+S+E} provocateur's strategy (expressive influence on flock opinion in order to increase the activity of the society's struggle against the problems and enemies of the elite)

SEE [СЭЭ] {= +D−L−O} strategy for enhancing sexual selection (Machiavellian tricks development, "show off"-behavior for reproductive success)
ESI [ЭСИ] {= −A+R+I} highly selective sexual strategy (the desire for reproductive isolation aimed at clearing the genome of harmful mutations - which creates sympatric speciation)
ILI [ИЛИ] {= +M−S−E} "lone scavenger" strategy (searching for and tracking someone else's misfortune in order in a situation of general disunity to be the first to use the freed up resources)
LIE [ЛИЭ] {= −H+P+C} strategy of escalation of interpersonal competition (stimulation of intraspecific personal efficiency through a race of equals to create something useful from "nobody's" resources)

IEE [ИЭЭ] {= +A−L−I} promiscuous friendliness strategy (the expansion of ideas about the social norms leading to interpopulation communication and the emergence of a linguistic & cultural settings over the genotype)
EII [ЭИИ] {= −D+R+O} eusociality strategy (altruistic intra-group mutual assistance and tolerance, which weakens the pressure of selection on an individual and increases the phenotypic intraspecific diversity)
SLI [СЛИ] {= +H−S−C} peaceful-avoidance strategy (moving to the deep periphery and occupying a specialized ecological niche for which there are no more applicants)
LSE [ЛСЭ] {= −M+P+E} productive strategy for transforming the habitat (creating an artificial biotope by one's own work that more sustainably reproduces the resources necessary for the survival)

addendum 2. Dispersion contribution of the 15 socionic dichotomy the overall diversity of personality traits
(based on the data of questionnaires created by V.L.Talanov's technology) 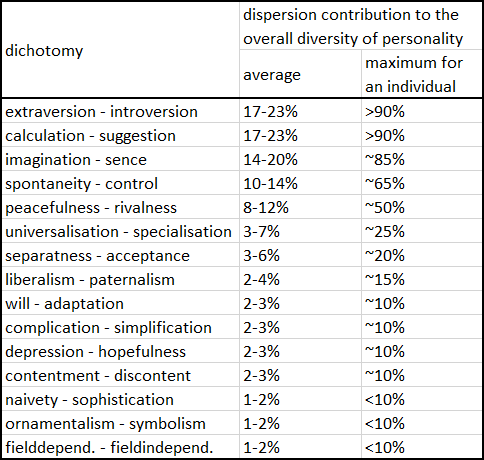 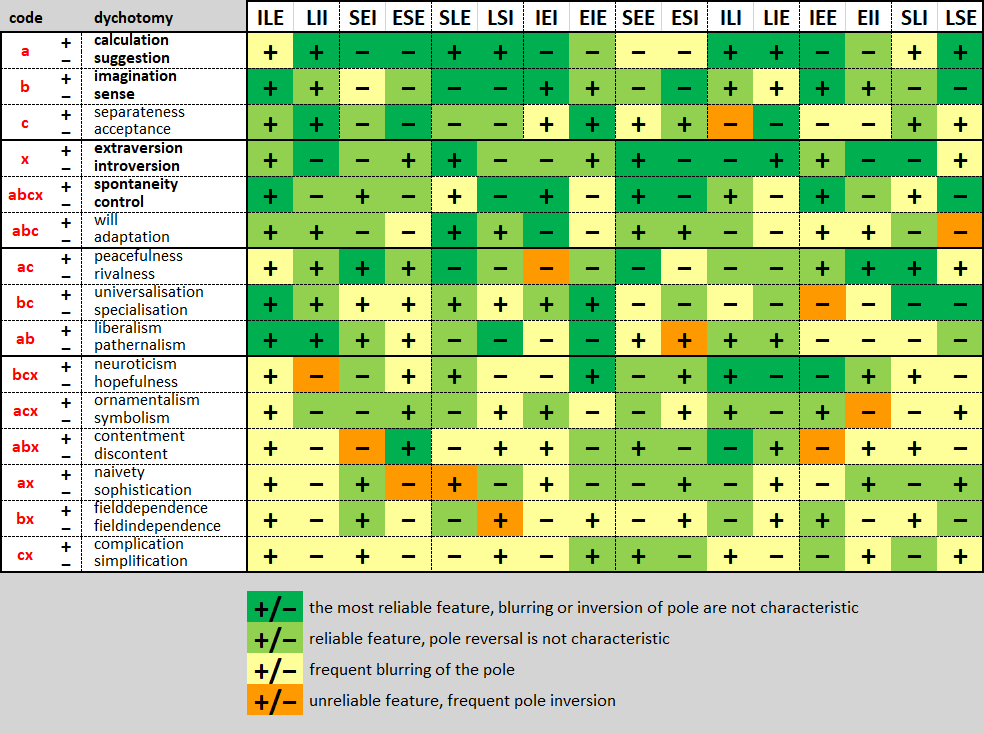 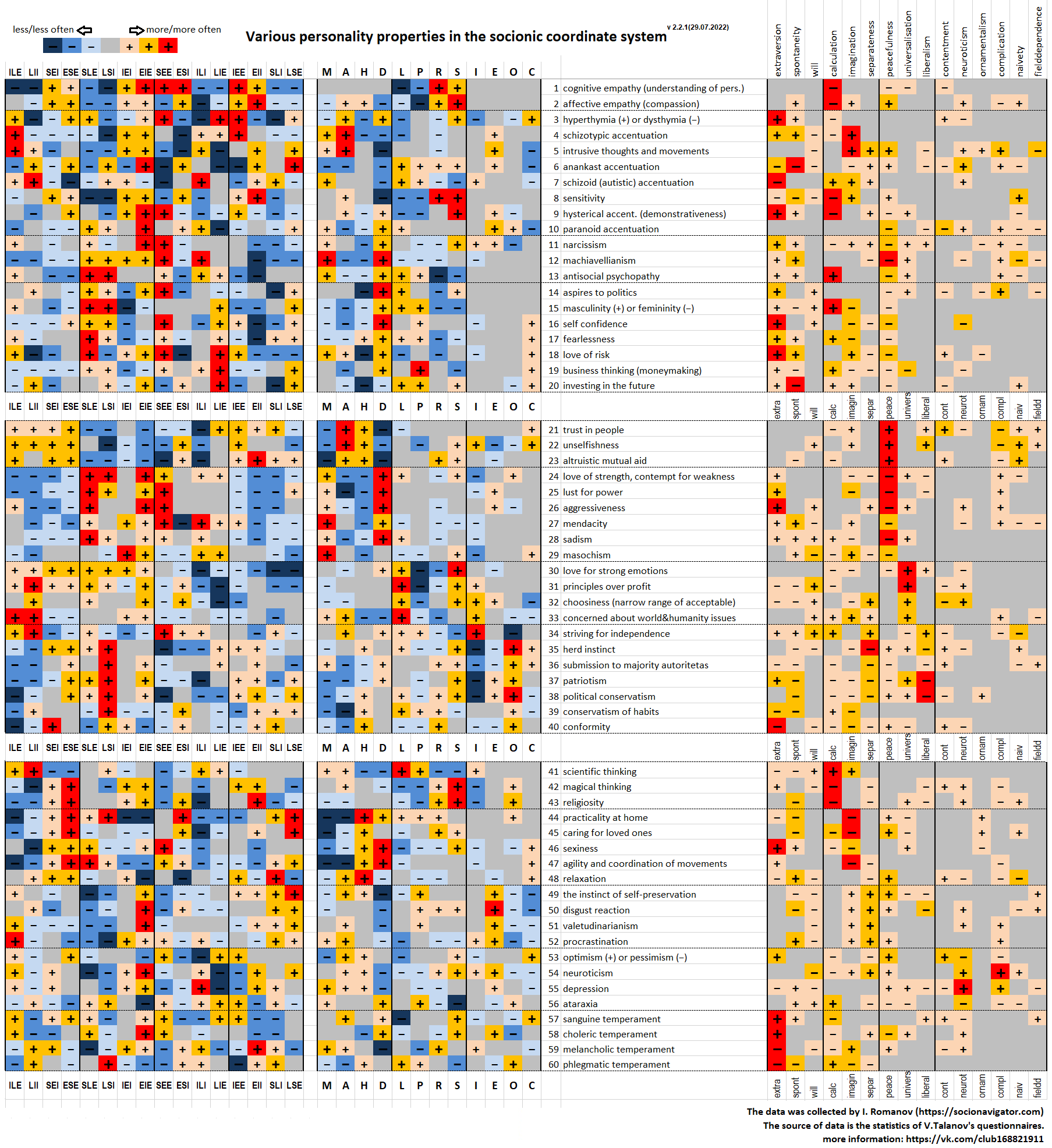 copyleft: Ivan Romanov, Saint-Petersburg, June 30, 2022
The author permits the free reproduction of information from this page provided that the source is hyperlinked.